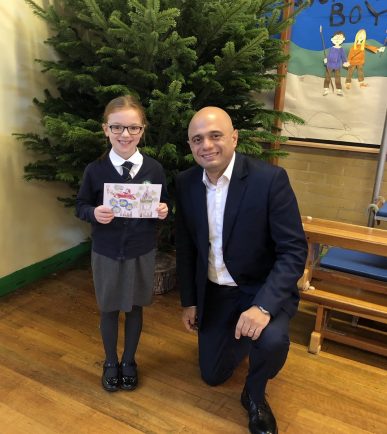 THE WINNERS of this year’s Christmas card competition organised by Bromsgrove MP Sajid Javid have been announced.

Hundreds of pupils from schools and nurseries across the district took part in the contest to provide a picture for the front of the card Mr Javid will send out.

The winner was eight-year-old Holly Moult from Beaconside Primary School.

The runners-up, whose designs will feature on the back of the card, include Aaron Brittain, three, from Coppice Nursery, Isabella Pettet, four, from Coppice Primary School and Amelia Cook, seven, from Beoley First School.

Sajid said: “Each year, I look forward to seeing the brilliant creative work of my constituents.

“Well done to all the children across Bromsgrove who entered the competition, and thank you to the judges who had a difficult job deciding the winner.”