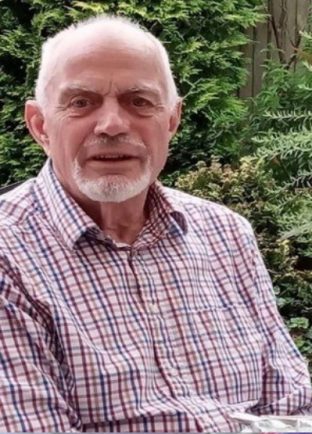 A BROMSGROVE man whose passion for music led to him inspiring thousands of students has died after being admitted to hospital with coronavirus.

Bernard David Hall-Mancey, who passed away last Thursday at the age of 77, was the musical director at Bromsgrove School from 1975 to 1987 and gave many pupils opportunities they would not have otherwise had.

Many students had no musical background and he even gave their parents the chance to sing in choral works.

Pupils he met later in life said their experience of participating in singing sparked a love of music in them and some pursued a career in the field.

In a statement his family said: “Bernard was one of the kindest and generous people you could wish to meet.

“He got along with everyone, no matter their station in life, and had the ability to light up a room with his wit and anecdotes, often accompanied by hilarious impressions.

“He was adored and loved by his family, his wide circle of friends and numerous past students, many of whom had stayed in touch with Bernard some 40 years after being taught by him.

“He is very much missed by all who knew him and the world has lost a true gentleman.”

In later years he gave his time freely to help at Bromsgrove School, adjudicating on music competitions and accompanying staff and students on many cathedral trips with the chapel choir. Many students sought his advice at the end of those concerts or trips.

Bernard was also hugely supportive of the orchestral and chamber concerts and remained actively engaged in music within the Bromsgrove community.

He was a very enthusiastic supporter of Bromsgrove’s Orchestra of St John and joined its committee as a valued and hugely knowledgeable contributor.

And he assisted the David Morgan Trust, a body set up to help young musicians in the Bromsgrove and Worcester area and he was also the secretary, right up until his untimely passing, of Bromsgrove Concerts.

Bernard was born in Early near Reading in 1942.

He attended Earley Grammar School and it was while he was in sixth-form his love of music developed.

Bernard graduated from the Royal College of Music as an Associate with an ARCM diploma as well as holding the GRSM, Graduate of the Royal Schools of Music qualification.

This provided him with a high level honours degree in music and he also graduated to be an Associate of the Royal College of Organists.

During the weekends, he would travel back from London to Reading to support local music organisations and in his final year he took up the temporary post of choir master and organist for Trinity Methodist Church.

After attaining his degree, Bernard went on to Birmingham University where he gained his DipEd teaching qualification.

His first job as a music teacher was at Fitzharrys School in Abingdon in 1965.

The following year he moved to Abingdon School where he created the junior choral society and brought them up to a particularly high standard which was reflected in two excellent operatic performances of Britten’s Golden Vanity and Rodney Bennett’s All the King’s Men.

He also ran the senior orchestra and as the school was linked with St Helen’s church, Bernard was also the choir master and organist at the church. In 1968, a service with Bernard conducting was broadcast from St Helen’s on Radio 4.

On leaving Abingdon, his fellow staff members reflected on Bernard’s ability to enthuse all ages and especially to guide those going through the first hurdles of piano playing.

In 1972 Bernard took up the post of Director of Music at Hinchingbrooke School where he also received tuition in conducting from Sir Adrian Boult (whom he had met during his studies at the RCM). That would hold him in good stead throughout his life.

A particular high note in 1973 was Bernard’s appearance as the conductor and choir master of the first trial of a new format for the TV programme Songs of Praise from Godmanchester.

Bernard ensured that the trial was a success which led to it being commissioned in full by the BBC to be presented in the programme format we know today.

Following his departure from Bromsgrove School in 1987, Bernard became a full-time examiner.

His travels took him all over the world, including Malaysia, Indonesia, the Caribbean, Canada, USA, Japan, Europe, Ireland and the UK.

He relished his trips abroad, not only helping thousands of children to develop their music skills and qualifications but making friends wherever he went. Many remember him as cutting a very distinguished figure with smart jet black hair and neat beard.

Eventually he became a co-ordinator for the Board and, before retiring, was involved in training ABRSM examiners as part of a scheme that ran in the 1990s. He would spend many hours regaling all of his hilarious stories and experiences whilst working abroad.

Bernard gained a great deal of satisfaction in giving back through the generosity of his time, experience and knowledge.

He is survived by his daughters Susan and Gillian, their husbands Elliot and Mark and his grandchildren Tom, Eleanor, Edward, Robyn and George.

The Autumn Newsletter for BAA has been produced as an e-edition. It is available here: BAA-Autumn-2020
...

THE STORY of an 18-year-old girl struggling to come to terms with the loss of her family in a terrorist attack forms the plot of
...

THE first drive-in cinema at Sanders Park has been hailed a success by Bromsgrove District Council after it was visited by more than 1,000 people.
...