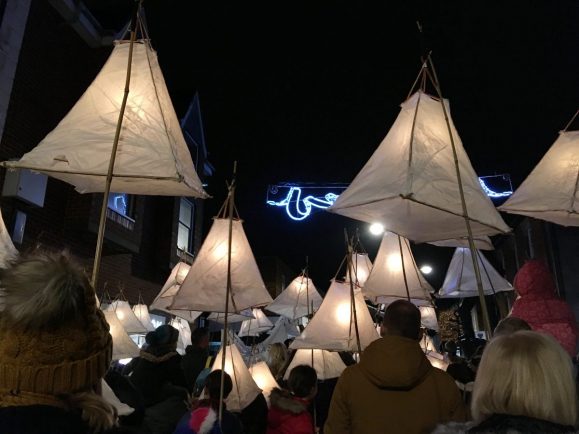 BROMSGROVE town centre was illuminated on Sunday as a sea of lanterns journeyed down the High Street for the Festival of Light.

It followed previous lantern parades, including last year’s organised by The Friends of St John’s and the one organised for Artrix’s tenth birthday but this one was bigger and better. And it is hoped the Festival of Light will become an annual event.

The show was directed by Kristoffer Huball who specialises in outdoor theatrics on a grand scale and is an Artrix Associate Artist.

The procession was led by town Samba band Someone at the Door and featured a 20ft Bunraku puppet which was created by the 101 Outdoor Arts Creation Space and puppeteered by Beautiful Creatures.

Hundreds of people turned out to see the spectacular show which was made possible after Huball worked alongside Artrix staff to organise lantern making workshops in schools, community centres and numerous other public spots.

Their aim was to get as many people creating lights as possible and more than 250 were in the festival parade.

There was also a performance by Birmingham-based Balkan Gypsy band The Destroyers.

BBC Hereford and Worcester’s Tammy Gooding also made an appearance to introduce the proceedings.

Bromsgrove centres Mmanager Cheryl Welsh said; “It’s wonderful to have such a community led, accessible and inclusive event taking place at this time of year and I think this Christmas we’ve proven what a fantastic venue our town centre can be.

“It’s been fabulous end to a jam packed calendar of events and I cant wait to see what next year holds.”