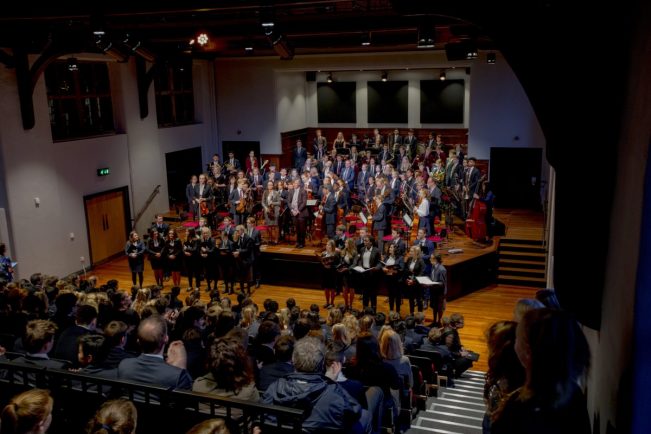 THE BRAND new Performing Arts Centre at Bromsgrove School has opened its doors after years of planning and construction.

The centre, which includes the new Cobham Theatre and Routh Concert Hall, seats an audience of 300 and includes a large drama studio, a suite of new music classrooms, recording studios and practice rooms.

The theatre has flexible seating options to accommodate a variety of performance styles and a hydraulic thrust stage allowing for a wide range of drama and dance performances.

A variety of drama performances were also held in the new Cobham Theatre, including the opening scenes and finale from The Pierglass, written by Bromsgrove’s Director of Performing Arts, Tim Norton, an extract from The Tales of The Thousand and One Nights and an extract from Samuel Beckett’s ‘Waiting for Godot’.

Tim Norton, director of performing arts at Bromsgrove, said it was a huge honour and a privilege to be temporary custodian of such a beautiful and exciting new centre.

“I’m delighted we were able to show off so many of the magical things the theatre can offer, but the opening showcase – highlighting flying, complex sound and lighting design and pyrotechnics was just a taste of what we can do.

“Similarly, we have shown just the slightest morsel of what our extraordinary performers, from the youngest to the oldest, can achieve.

“We now look forward to finding ways of unlocking the full potential of both our students and our facilities over the coming years and exploring the many ways we can share what we have created with our local community.”

The performances were all live-streamed to the school’s Facebook page.