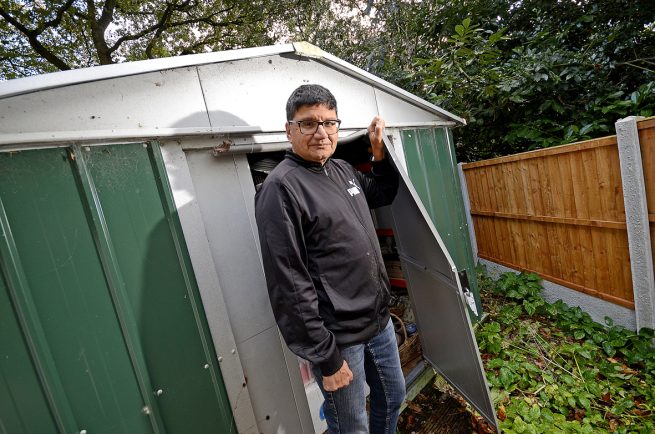 REPRESENTATIVES at Bromsgrove’s historic St John’s Church have hit out at vandals who have targeted the building twice in the last two weeks.

A fortnight ago, the crypt door was forced open and destroyed, causing hundreds of pounds worth of damage.

With the exception of the church’s Nativity display, nothing of value is stored in the crypt apart from ‘mouldy broken furniture’.

There was much relief among the church’s representatives that the display was not damaged, which could so easily have happened.

The wooden stable was lovingly made around five years ago by a dying congregant as one of his last gifts to the church and the community.

Then on Thursday, storage sheds – where vital items are kept, such as decorations for the Christmas Fair and wares donated by church members and the local community – were vandalised for no apparent meaning.

Church warden Neil Cramb said: “They’re tucked round the side of the hall, and only when we have to deposit donations or dig out fair equipment do we really pay attention to them.

“Basically, this senseless act is going to cost us dearly – money we don’t have – and time, which is scarce, especially given that we’ll have to work outdoors in the mucky weather to repair our sheds.”

He added the senseless vandalism had also set back the church’s mission to help the community.

“With regard to this violation of our property and because of the potential loss of proceeds from the Christmas Fair, this really is an indirect theft from the people of Bromsgrove.”

It comes at a very busy time for the church which is well into its pre-Christmas preparations.

Neil added: “I don’t understand why anyone would do anything like this – nobody benefits or gains from these mindless actions when all we are trying to d is make life better for the people of Bromsgrove.”