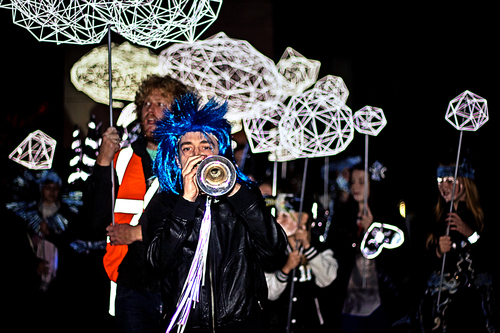 MORE THAN 35 artists from the UK, USA, Germany and Spain will head to the Longbridge Light Festival next Saturday (October 22nd).

Part of the Longbridge Public Art Project (LPAP), the show will become a platform to showcase the work of multi-talented artists.

The theme Shadow Factory is a historical reference to the Shadow Scheme of the Second World War, led by Lord Austin, founder of the Austin Motor Company.

Following the success of the first Longbridge Light Festival in 2014, this year’s offering brings a series a spectacular light and art installations across the town centre. There will also be a free festival on Saturday night featuring music, performance art, pop-up theatre, family workshops, artisanal market stalls and award-winning street food.

And there will be art and performance from local schools and Bournville College students.

Resident artist Whipps is also in the final stages of restoring a 1979 1275GT Mini, and has recorded former Longbridge workers reciting the names of every paint colour ever produced on the former car factory site.

Visitors will be dazzled by a dramatic series of projections lighting up the night sky, a range of sculptural installations, and a series of works reflecting the local community’s heritage.

The show kicks off at 6pm, runs until 10pm and admission is free.