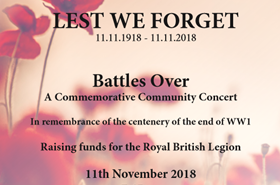 A COMMEMORATIVE Community Concert will be held at Artrix at 7.45pm on November 11 to remember the centenary of Armistice Day and raise funds for the Royal British Legion.

Battle’s Over will include performances from the Vintage Class singers, Blackwell Concert Band, featuring Town Crier Kevin Ward and Catherine Tabberner, the Chadsgrove Choir and Fairfield.

Leigh Blakeman from Vintage Class said had the idea last year and got in touch with Jules Evans from the legion.

“We have wanted to do something big for the Royal British Legion for a while so I saw the opportunity to do a community commemoration event with a good mixture of performances and a ceremonial section too.

“It has all been put together to remember, celebrate and honour all those who served their country to give us all the freedom we have in our lives now. “

The annual Remembrance Sunday parade and Armistice Day commemorations will take place in Bromsgrove earlier in the day and a beacon will be lit at St John’s Church in the evening.