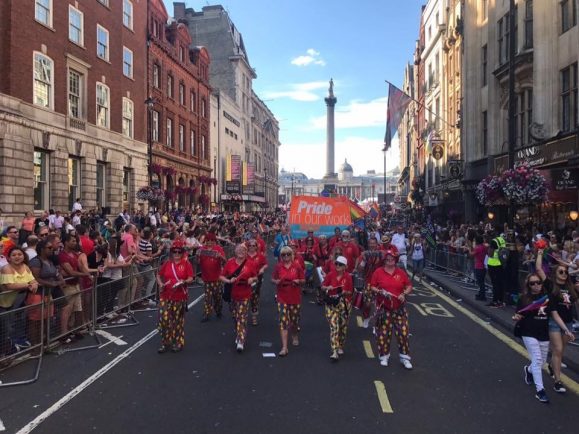 BROMSGROVE Samba band Someone at the Door, which will be leading the Festival of Light parade on December 17 has just celebrated its 20th anniversary with a special party.

The community band, which has about 30 musicians of all ages and abilities, play music based on Brazilian Samba with influences from Reggae, Hip Hop, Bhangra and more.

The anniversary event was held at Bromsgrove Tennis and Cricket Club and saw members past and present enjoy live music and a hog roast.

Overhead projections and static displays showed the band’s 20-year history and a Samba Band jam of about 40 percussionists ended the night.

Formerly the Bromsgrove Community Band, Someone At The Door became independent in 1999 and performed at various carnivals, village fetes and parades.

Band member, Maurice Preece said: “Recently we have performed at The LG Arena-NEC and The Ricoh Stadium Coventry with the highlight of our career to date being invited to perform at the Anniversary Olympics in 2013.

“Together with more than 600 others we also hold a Guinness World Record for the most drummers performing in one place at one time.

“A huge thanks to Rory Shannon for his organisation and coordination.

“It was a fantastic and memorable evening with our Samba Band family, the beat goes on.”