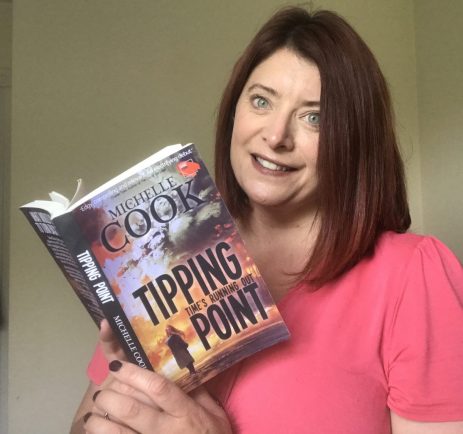 THE STORY of an 18-year-old girl struggling to come to terms with the loss of her family in a terrorist attack forms the plot of Tipping Point – the debut novel by Bromsgrove author Michelle Cook.

The eco-thriller is set in a dystopian England in 2035 and centres on Essie Glass who lives a meagre existence while the Earth’s climate continues on its accelerating collapse.

A powerful elite controls the population with propaganda, intimidation and constant surveillance.

Esssie uncovers a conspiracy to suppress green technology which could reverse global warming and has to decide how much she is willing to risk to expose it.

Michelle said: “The novel is set in and around Worcestershire and was inspired by worry about climate change and how ill-quipped we are to tackle it in the present circumstances.

“I wanted to write an exciting adventure with an irrepressible main character who really does have the potential – and the guts – to change the world.”

Michelle was born and grew up in Bromsgrove.

After moving away to study Psychology at Liverpool University and living in Nottingham for seven years, she returned to Bromsgrove in 2003.

She lives in Breme Park with her husband Daniel, their two children and a cat called Lyra.

By day she works as a project manager for the NHS.

She first became interested in creative writing at the age of ten when her slapstick tale of two talking kangaroos breaking out of a zoo was read ouut in class.

She has had several flash pieces published, was long-listed for the Cambridge 2020 prize for flash fiction, and placed first in the February 2020 Writers’ Forum competition with her short story The Truth About Cherry House.