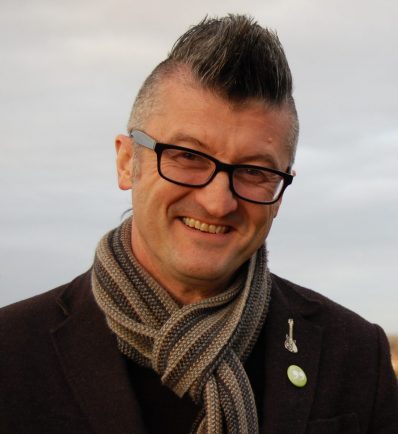 RUBERY writer, poet, musician and singer Spoz has spoken of his devastation at Artrix ceasing trading.

And the 55-year-old former Birmingham Poet Laureate has called for a steering group to be set up to secure the long-term future of the venue as soon as the Government’s COVID-19 restrictions have been lifted.

He said: “I remember Artrix when it first opened – I was showed around it by then director Andy Woods two weeks before the launch and I thought it was absolutely fantastic – just what Bromsgrove needed.

“At the time I had just been made redundant from MG Rover and an arts centre popped up in the area I live in – it was almost like fate as I had already decided I wanted to do something with the arts for the next stage of my life.

“I have always seen my life as being split up into three chapters – the first was school, the second was work and the third is the arts.

“Artrix has been such a big part of that third chapter and I have done so much over the years there and seen so many acts.”

Spoz was present at what turned out to be the centre’s final gig – a BritPop revival night involving Nigel Clark from Dodgy, Chris Helme of The Seahorses and Mark Morriss of The Bluetones.

Speaking about his hope for a future for the centre he said: “As soon as this (COVID-19 restrictions) is all over we need to set up a steering group with members of Bromsgrove arts and theatre groups, council representatives and other interested parties and I will definitely want to be part of taking it forward.

“We have to come up with a rescue plan.”

He added the council could take control as happens with Redditch’s Palace Theatre and said MP Sajid Javid had a role to play, although he was quick to point out his view that politics should not be directly involved in art.

“That would be the last thing we’d want – the problem is very often a lot of things in life are about making money but the arts is the exception – it is there for people’s enjoyment.

“When Artrix opened there would be a number of gigs and shows that would make the centre a lot of money and then that would be used to fund the other elements, such as the not so popular shows and community projects.

“The building must stay as a theatre and arts centre as back when it was built it was just what Bromsgrove needed and it will be so again when the coronavirus pandemic is over.”

For Artrix’s tenth birthday, Spoz penned the poem below about what Artrix meant to him.

What Does the Artrix Mean to Me?

A hand called the Artrix dragged me back to the river bank.

When I just couldn’t see the Andy Woods from the trees,

Together with Bev, they got me up off my knees,

No guarantees, just a place with some freedom

And some words of advice, should I ever need ‘em.

Around planet Artrix – I set my orbit.

With funding shaven to a hair past bare minimum,

Though it’s starting to grow back.

They took some flak in those opening two years,

As rallying calls were falling on deaf ears.

That best kept secret that we were dying to spill,

What was lacking in resources, was made up in will.

As the blinkered cynics, who’s “arts” weren’t in it cried “fail!”

We always knew our “arts” would prevail.

A home from home –

From the silver foxes to the fountains of youth,

Drop by any time if you’re looking for proof.

Providing your pleasure is never a chore

And there’s a wealth of knowledge with the college next door.

From the biggest names to the unknown “Joe”

If you’ve got an idea, Artrix gives it a go

An opportunity to grow, to showcase your skill

From young people’s theatre to beats from Brazil

The thrill of an audience’s appreciation

The Artrix is … an inspiration.

Julian Hunt returns for an additional date in the Spring Season to talk about L.T.C. Rolt, pioneer of railway and canal preservation . Rolt was
Contact and more...

The Bromsgrove International Musicians Competition Finalists' Concert 7.00pm at Routh Concert Hall, Bromsgrove School.   The concert by Finalists is the culmination of this year's
Contact and more...
More events...