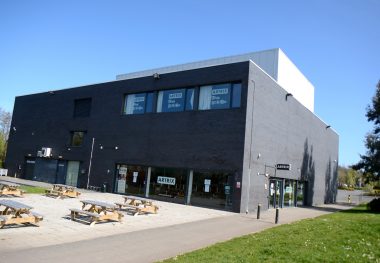 RENOWNED comedians Marcus Brigstocke and Hal Cruttenden and Dodgy frontman Nigel Clark were among those taking to social media to express their sadness about Artrix’s demise.

And organisers of classical music and literary events have written into the Standard – illustrating the widespread appeal of the centre.

Brigstocke, who has made TV appearances on Have I Got News for You and Live at the Apollo, wrote on Twitter: “An absolute tragedy.

“Such a great example of brilliant local theatre.

“Offered loads of great and varied nights out for people in Bromsgrove and a great place for the likes of me to play.

“So sad about this – I used to sell well here when I never sold that well anywhere else.

“Lovely lovely staff and a middle England audience that veered nicely between laughter and disapproval at the political stuff.

Clark, who ended up performing the last gig there, tweeted: “It’s such a shame, we had some great gigs there the crew and everyone that worked there were great. Sad day.”

Musician Daniel Trigger was one of many who have written us letters this week.

He said he had many happy memories of performing at Artrix with his band Trigger and of attending shows, and watching films.

“Artrix is critical to Bromsgrove as it provides a central hub for all of the local performing arts, while also offering an essential source of joy and entertainment to the community.

“We can’t accept the closure of the Artrix.”

Former Bromsgrove Arts Alive chairman Jim Page has organised classical music events since its opening, including weekends of complete Beethoven and Shostakovich quartets which attracted audiences from across the country.

He said: “Ever since Artrix opened – with a classic design by architect Glenn Howells – it has been at the heart of the cultural life of Bromsgrove and with a wide variety of shows it has catered for all tastes in the community.

“It proved the ideal venue as with excellent acoustics and sightlines it pleased both audiences and performers.”

Historian and arts champion Jennie McGregor-Smith said Artrix had provided so much for the town in the last 15 years adding, although its financial struggles were well-documented, it going it ceasing trading was a shock.

She said Howell’s design had seen the auditorium boast the best acoustics in the whole of Worcestershire and praised it for the multitude of activities it had hosted – from local and professional drama and all kinds of music to jewellery making, belly dancing, ballet art exhibitions and cinema screenings.

“Bromsgrove people fought for many years to get an arts centre here.

“We mustn’t let it disappear.”

Margaret Evans, a member of WORDS which put on literary events at the venue, said she was ‘dismayed’ at the closure, calling Artrix a ‘jewel in Bromsgrove’ and praising its friendly helpful staff and team of volunteers.

She added it offered versatile entertainment and education groups, meant locals did not have to travel to other towns and cities but it also drew people to Bromsgrove from other areas.

“Where will groups gather for recreation and culture now?

“The number of suitable concert and sports halls has reduced drastically.

“The old college on Burcot Lane had the Spadesbourne Suite where concerts took place before the Artrix was campaigned for by local residents and the Dolphin Centre Sports Hall was demolished recently where sports groups regularly met.

“Please where are we to go, and what are we to do in our spare time now?”