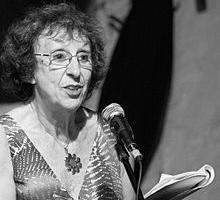 Elaine Feinstein (nee Cooklin) is a prize-winning poet, novelist, playwright, biographer and translator. She has written fifteen novels, many radio plays and television dramas. Her first novel, The Circle (1970) was long listed for the ‘lost’ Man Booker prize in 2010. Her five biographies include A Captive Lion: the Life of Marina Tsvetaeva (1987) and Pushkin (1998). Ted Hughes: The Life of a Poet (2001) was shortlisted for the biennial Marsh Biography Prize. Her biography of Anna Akhmatova, Anna of all the Russias (2005) has been translated into twelve languages, including Russian.

Elaine Feinstein has travelled extensively, not only to read her work at festivals across the world, but to be Writer in Residence for the British Council, first in Singapore, and then in Tromso, Norway. She was a Rockefeller Foundation Fellow at Bellagio in 1998. Her work has been translated into most European languages. She has served as a judge for the Gregory Awards, the Independent Foreign Fiction Award, the Costa Poetry Prize and the Rossica Award for Literature translated from Russian, and in 1995 was chairman of the judges for the T.S. Eliot Prize.