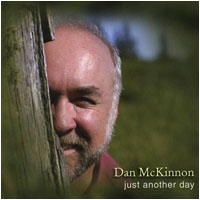 Though he can trace his family back to the Skye McKinnons, only a few generations removed from Scotland, Dan himself hails from Halifax, Nova Scotia, in the Canadian Maritimes, an area rich in the musical and cultural traditions of the North Atlantic. His warm baritone voice, superb guitar arrangements and original compositions have won him widespread praise. Dan's thoughtful compositions and smooth melodies cover the entire folk spectrum, with themes traditional, historical, contemporary and universal.

A gentle unassuming man – one of nature's gentlemen, in fact – who travels around the UK by train and bus with a backpack and a guitar on his annual tours from Canada. Dan has tremendous stage charisma and engages an audience – both hearts and minds. He's equally happy on a large festival stage or a small folk club, telling stories in song. And what stories… tales of the British war brides of Canadian servicemen in the 1940s… the story of how Canadian merchant navy sailors eventually got the recognition they deserved for their war service – sixty years late… tales of his own grandfather and learning about Aesop's fables as a child… the true tale of a bride who wanted the best wedding dress and lost her beau by chasing her dream…

In addition to his many solo performances and recordings, Dan has performed with Symphony Nova Scotia and toured Atlantic Canada and Ireland as part of an International Theatre Festival show about the life and times of Stan Rogers.

Visit www.bromsgrovefolkclub.co.uk for more details, maps and directions and so much more

Bromsgrove Methodist Centre Speaker: Richard Churchley Bromsgrove Society member, editor of the “Feckenham Forrester” and local historian, Richard will take us back to who and
Contact and more...