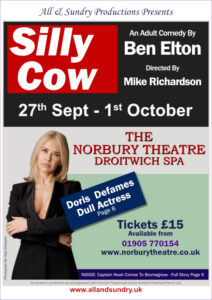 Doris Wallace has everything a tough tabloid columnist could want: a toy boy with a regular supply of Colombian, a pretty personal assistant who might share her libidinous preferences, and the prospect of her own television show. Being sued by an actress for libel is a petty annoyance, but Doris puts her in her place by revealing her ample cleavage as she flirts with the judge and spouts populist bravado. She is ready to celebrate her victory in court when things begin to go wrong: television materials are missing, a pal she double crossed wants revenge, her accountant is about to pull a fast one and those she has defamed in her column tie her to a chair during her show and dish out the kind of humiliation she inflicts on others. This is a hilarious adult play by the Lawrence Olivier Award-winning author Ben Elton.

All and Sundry - Silly Cow

Norbury Theatre, Droitwich Doris Wallace has everything a tough tabloid columnist could want: a toy boy with a regular supply of Colombian, a pretty personal
Contact and more...

Routh Hall, Bromsgrove School (and streamed on line) Illuminate Women's Music Shining a light on the work of women composers from both the past and
Contact and more...

The Pomegranate Trio previously came to us in Nov 2016 when they included the Nicholas Maw trio. Their programme of French Trios is unexpectedly wide
Contact and more...

The Dante String Quartet have featured many times in our concerts including the memorable Shostakovich weekend 2018. The Venables work is an important piece which
Contact and more...
More events...